Why read the Art of War by Sun Tzu? 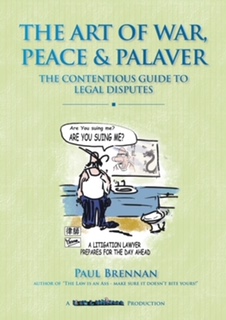 Most people engage in litigation only once in their lives, unless they have a very understanding spouse. At the outset, there is a lot to be gained by reading The Art of War by Sun Tzu, which is not only a manual of military strategy, but a sage guide to engaging in conflicts both business and personal.

I first came across the Art of War when I lived in Hong Kong. It was written about 2,500 years ago by Sun Tzu, general of the Kingdom of Wu. Much has been written about the Art of War by management gurus and others so that there are at least 1,500 titles in paperback on Amazon alone.

The Art of War has an immediate strategic advantage when compared with any law book in that it is only thirteen chapters (6,000 words) long in translation, available for immediate download and free. [1]

It was written at a time when an ill-advised attack on a neighbouring state could lead to disaster and death. This may not be the case in a dispute between neighbours today, but if you have ever been involved in a dispute with your own neighbour you will know that it can certainly feel that way. The advice is aggressive as winning is all important but also cautious maybe because one of the casualties of a wrong move was often the general who planned it.

Sun Tzu advised that you should choose an able and disciplined general. This is good advice for anyone choosing a lawyer. However, your lawyer may find it difficult to meet the standard of discipline demanded by Sun Tzu. For instance, he gives an example of a general who was known as a disciplinarian who sentenced himself to death when his horse strayed in the cornfield. He was persuaded by his men to commute his own sentence to a haircut, but it was close.

Some of Sun Tzu’s other advice such as obtaining information by bribing your enemy’s officials, seeking out concubines greedy for gold in your enemy’s camp or the chapter on the use of fire in battle has less application in legal practice today.

However, the book contains plenty of other advice for legal practitioners and clients alike.

The Art of War explains why the forceful, immediate action expected by clients in new litigation matters should be combined with some forethought. Before rushing on, I try to remind myself of the words of Brendan Behan who said “I have never seen a situation so dismal that a policeman couldn't make it worse” which could easily apply to a lawyer who does not ask “Where are we going with this?” preferably before sending out the initial letter.