Insolvent Trading- Is Everyone At It?

Insolvent Trading- Is Everyone At It? 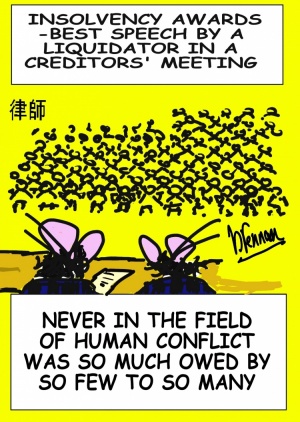 Despite the embarrassment, as a director of a large company, you will stop operating rather than risk insolvent trading.  To do otherwise is to risk being personally liable.

On the other hand, a director of a small company can usually stand the embarrassment. Yet, with the family home at risk and a 4 wheel drive to support, it is tempting to press on and see how it goes unless someone unsportingly presses the point.  In bad times, long term creditors such as banks and landlords do not want to shoot themselves in the foot by being trigger happy.  But, if you have an ungrateful supplier who cannot wait for their money, as a director, you may be accused of insolvent trading.  So what is it?

A company can take on any liability, it is only when the bill arrives and it cannot pay that a problem arises.  A company which cannot pay its debts as, and when they become due is insolvent. Once the company is in this insolvent state and incurs a new debt (continuing debts such as rent and teenage children don’t seem to count) the company is trading insolvently and you as a director may be liable.  You may deny that you suspected that the company was insolvent when the debt was incurred.  This may work unless it was obvious, for instance, a reasonable director in your position would have suspected.

If sued personally by the liquidator or a creditor, you have basically two defences:

Insolvent trading can be difficult to prove legally.  It is awfully easy to let a few billion slip through, as any bank will tell you.